Trimethylamine-N-oxide (TMAO) has emerged as a promising new therapeutic target for the treatment of central nervous system diseases, atherosclerosis and other diseases. However, its origin in the brain is unclear. Gynostemma pentaphyllum (Thunb.) Makino can reduce the increase of TMAO level caused by a high fat diet. But its effective chemical composition and specific mechanism have not been reported. The study confirmed that TMA was more easily to penetrate blood brain barrier than TMAO, the MAO enzyme was partly involved in the transformation of the TMA in brain, which further supplemented the choline-TMA-TMAO pathway. Based on the above metabolic pathway, using multi-omics approaches, such as microbiodiversity, metagenomics and lipidomics, it was demonstrated that the reduction of plasma TMAO levels by gypenosides did not act on FMO3 and MAO in the pathway, but remodeled the microbiota and affected the trimethylamine lyase needed in the conversion of choline to TMA in intestinal flora. At the same time, gypenosides interfered with enzymes associated with TCA and lipid metabolism, thus affecting TMAO and lipid metabolism. Considering the bidirectional transformation of phosphatidycholine and choline, lipid metabolism and TMAO metabolism could affect each other to some extent. In conclusion, our study revealed the intrinsic correlation between long-term application of gypenosides to lipid reduction and nervous system protection, and explained why gypenosides were used to treat brain diseases, even though they had a poor ability to enter the brain. Besides, it provided a theoretical basis for clinical application of gypenosides and the development of new drugs.

This work was published online in the prestigious journal of Pharmacology “Pharmacological Research” with the title of “Unravelling the metabolic pathway of choline-TMA-TMAO: effects of gypenosides and implications for the therapy of TMAO related diseases”. Qiao Zhang, a M.S. student of 2018 from School of Pharmacy, Fudan University, is the first author. Professor Ping Yang (Instrumental Analysis Center, school of pharmacy, Fudan University) and Professor Li Liu (Shanghai Institute of Pharmaceutical Industry) are co-corresponding authors. The authors also deeply thank Xiaomin Guo, Cao Xie, Zhonglian Cao from Instrumental Analysis Center,school of pharmacy, for their technological contribution. 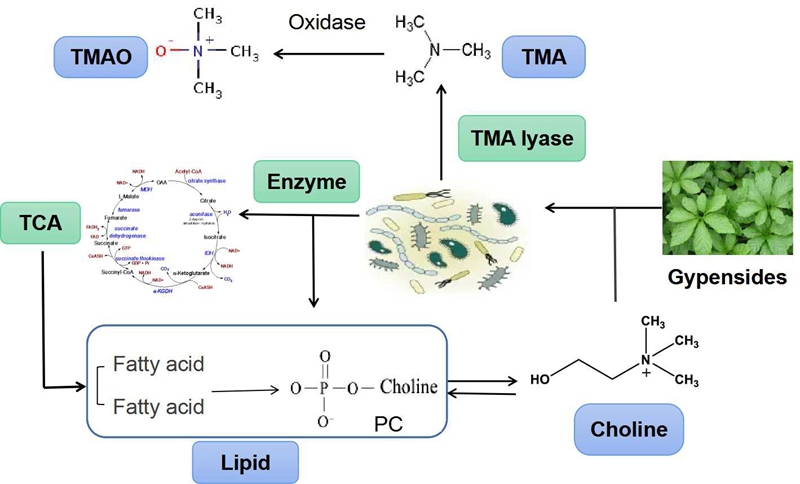